The chance to produce a cover to commemorate the final bowing out of service of the legendary Concorde could not be missed, although not a military aircraft persay its concept, design and much of the experimental work there is much in common - most notably the Olympus engines which were also used in the Avro Vulcan. We have therefore made it a special in our 600 Series with the code AV600-SP1. As Concorde first flew in 1969 and went into service with British Airways in 1977, we have elected to show Concorde in its full splendor during the 1980s coming into land with the characteristic British Airways markings of the period. The scene shows Concorde in a striking pose - nose high and looking quite purposeful.

Cover has been signed by:

Ross Wardle: artist who painted the artwork used on the cover

John Hutchinson: former Concorde pilot Captain John Hutchinson, who flew Concorde aircraft for fifteen years between 1977 through to 1992. Having joined the Royal Air Force in 1955 and served with No 202 Squadron and then a Flying Instructor until May 1963. He then gained his Civil Pilots License and joined McAlpine Aviation becoming the Chief Pilot and Type Rating Examiner. In September 1966 he joined BOAC and qualified as a co-pilot on the Boeing 707. In April 1971 he converted to being a co-pilot on Boeing 747s. In December 1975 through to April 1976 he undertook the command course on Vickers VC10s and then went on to fly as Captain on VC10 flights until August 1977. He then converted onto the Concorde and qualified as a Concorde Captain in December 1977. In February 1987 he flew as Route Check Captain until his retirement from British Airways in April 1992. He was a consultant for the US High-Speed Research programme from 1992 until the programme was cancelled in 1998.

Peter Baker: who joined the Royal Air Force as an aircrew cadet in 1944 and after training a

t the General Reconnaissance School and between 1945-1949 served with Nos 201, 209 and 230 Squadrons and then became a flying instructor. In 1953 he was selected for the Empire Test Pilot's Course at Farnborough and for the next three years he was at A&AEE Boscombe Down. In 1958 he retired from the RAF, with the rank of Squadron Leader, and joined Handley Page and spent five years as a test pilot on the Victor B Mk2 test programme. In 1963 he left Handley Page to join the British Aircraft Corporation (later becoming British Aerospace) as a test pilot principally on the VC10 and BAC1-11 test programmes and was the project pilot on the BAC1-11 from 1964-66. In 1967 he was appointed assistant Chief Test Pilot for Concorde and in 1980 he was promoted to Deputy Chief Test Pilot BAe Filton. In 1982 he left BAe to become Senior Test pilot with the CAA Airworthiness Division becoming Chief Test pilot in 1986. After retiring from the CAA he spent two years as freelance airline pilot before becoming an aviation consultant. His awards include the Air Force Cross following his work with A&AEE, a Queen's Commendation for Valuable Services in the Air and the RP Alston Medal.

John Cochrane: graduated from RAF College Cranwell in 1952 and served with Nos 617, 214 and 90 Squadrons. He graduated from the Empire Test Pilot's School in Farnborough in 1960 and resigned from the RAF with the rank of Squadron Leader to join Vickers-Armstrongs Ltd in 1962 as an experimental test pilot. He was appointed Project test pilot for Concorde in 1966 and in 1968 he became Deputy Chief Test Pilot, Commercial Division BAC and in 1970 Assistant Director Flight Operations BAC/BAe. During the Concorde development project he flew the Mirage III, Mirage IV, Lightning, BAC221 and HP115 having made evaluation test flights in the BAC221 and HP115. He was co-pilot with Brian Trubshaw on the maiden flight of Concorde 002 on 9 A

pril 1969 and was test pilot for all Concordes manufactured in the UK either in command or as co-pilot. Responsible for extended flight envelope and intake control systems, he also commanded Concorde 101 (G-AXDN) for all ultimate limit flights. He was awarded the Queen's Commendation for Valuable Service in the Air in 1971, the Derry and Richards Award for flight test achievement in 1977. He retired from BAe at the end of the Concorde programme and joined Cyprus Airways as an airline Captain.

Raymond Baxter: former BBC Broadcaster and special guest on the BBC's live coverage of Concorde's last arrival into Heathrow Airport, who also famously commentated on the aircraft's debut test run in 1969 with the immortal words 'She flies'. He flew as a RAF Spitfire pilot during World War II.

In 1942 Lord Callaghan volunteered for the Royal Navy as an ordinary seaman. He served with the East Indies fleet stationed at Ceylon (now Sri Lanka), later being commissioned as a lieutenant in the Royal Naval Volunteer Reserve. He joined the Labour Party in 1931. In 1945 he was elected to Parliament as MP for Cardiff South. He became the first supersonic Prime Minister on the 26 June 1976 when he flew from London to a economic meeting in Puerto Rico in a chartered British Airways Concorde. The 5,220 mile flight took 4hr 10min. 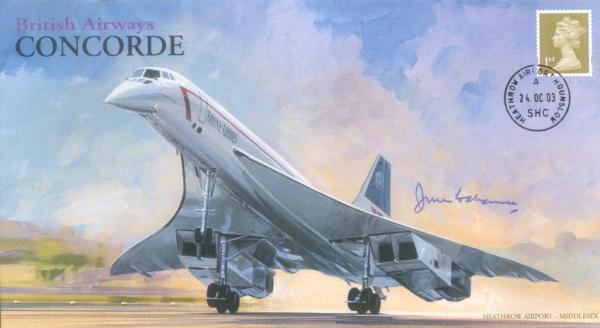