The artwork, by artist Ross Wardle, and shows the watch towers and searchlights watching over the prisoner's huts at Stalag Luft III as night draws in. Two German soldiers, or goons as they were known to the POWs, are shown standing on patrol - little knowing that 30 feet below them there is a tunnel. Tragically 50 of the 76 Allied POWs that escaped were executed by the Gestapo on Hitler's orders after being recaptured.<p> The story of the Great Escape was made into the cult 1963 film The Great Escape starring Steve McQueen and Richard Attenborough.

Cover is signed by:

Squadron Leader Jimmy James MC who took part in the Great Escape on 24 March 1944 and was 39th to exit the tunnel. Recaptured he was sent to Sachenhausen concentration camp where he escaped via tunnel in September. He was released at the end of the war and awarded the Military Cross and a Mention in Despatches for his escaping activities.

Wing Commander Ken Rees who had helped build the tunnel and would have been the 79th out of the tunnel on the night of the Great Escape but he heard shouts and a gun fired so he and two other POWs about to exit the tunnel turned around and went the way they had come. He was the last to exit the tunnel at 'hut 104' and for his part was sent to 'the cooler' for 14 days. 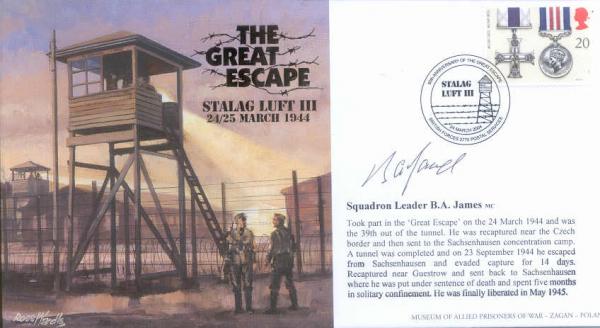