XL426 Taxi Run
There was another variant which was taken aboard XL426 for a high speed taxi run and signed by Group Captain Bill Burnett, a former Vulcan pilot with No 617 Squadron and also flew XL426 and also signed by Ken Hyde, who acted as the AEO on the taxi-run 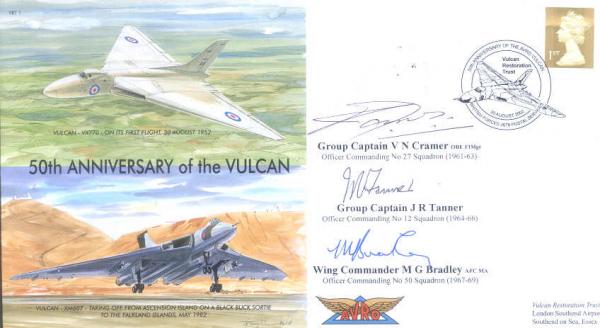 VRT1 - ASCENSION ISLAND FDC
Ascension Island produced four stamps to commemorate the 20th Anniversary of the Falklands War, as one of the stamps showed the Vulcan at Wideawake Airfield on the island we have produced just 200 full set First Day Covers. The postmark shows a Harrier jump-jet and all the covers have been cancelled by the Ascension Post Office, upon their return we have had the covers signed by Group Captain Jeremy Price CBE, who was the senior RAF Officer, Ascension Island in 1982 during the conflict. 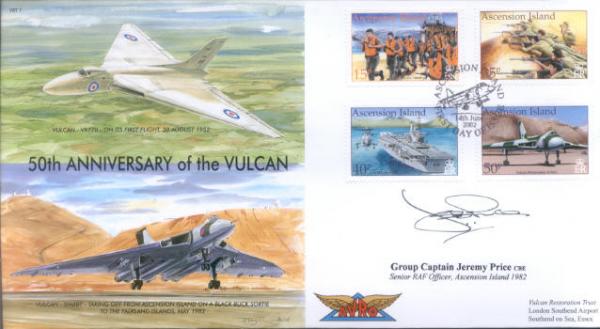 The VRT had 600 covers produced with slightly different artwork showing Vulcan VX770 on its first flight on the 30th August 1952 with Vulcan XL426 landing at Southend Airport on 19 December 1986. The cover bears the Avro and Vulcan Restoration Trust logo in colour and bears a Queen's Golden Jubilee Gold Definitive stamp cancelled with the official 40th Anniversary of Avro Vulcan XL 426 - Southend Airport postmark. Furthermore the cover has been flown in a VC10 of No 101 Squadron and then carried aboard Vulcan XL426 on a taxi-run at Southend Airport on the 24th August 2002.

One version of the cover has been signed by the three members of the Vulcan Restoration Trust who taxied the covers: John Reeve, a former Vulcan pilot who took part in the Black Buck raids when the Vulcans bombed the Falkland Islands in 1982, Geoff Ledbetter also a former RAF Vulcan crewman and also Ian Scott (200 were produced and signed on the day)

Another version was produced signed by Bruce Dickinson, of Iron Maiden fame who took the control of XL426 for a high speed taxi run in August 2006. 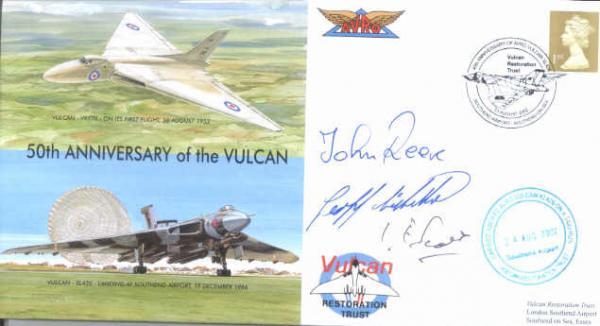